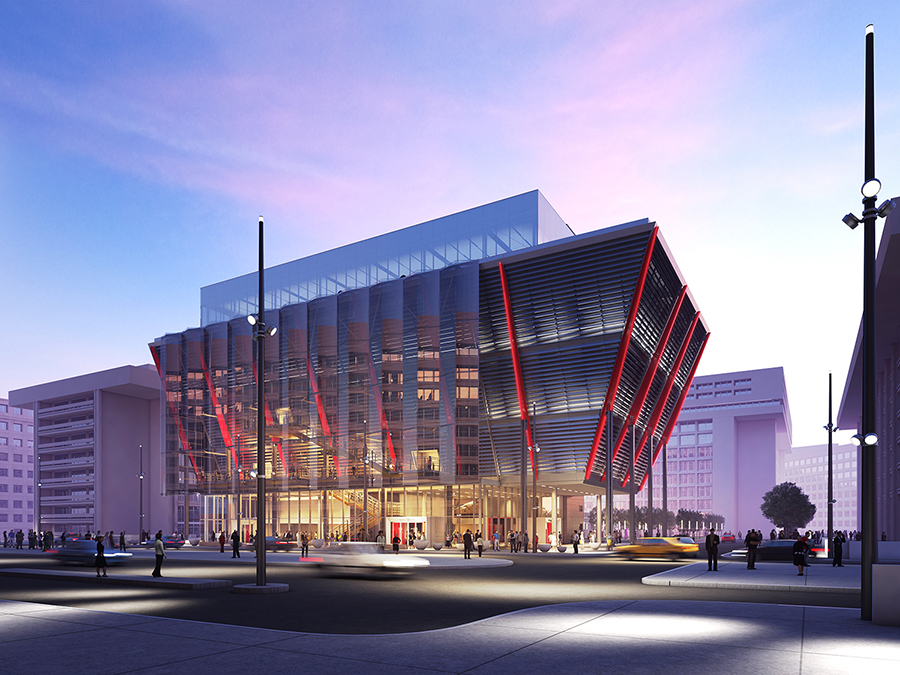 WASHINGTON, DC (June 15, 2016)—Construction fences are up and site work is underway for a new and expanded International Spy Museum (SPY) in the nation’s capital. Preparations recently began as SPY and The JBG Companies reached agreement to relocate the Museum to a newly constructed building at L’Enfant Plaza—between the National Mall and the Southwest Waterfront’s Wharf. This new facility will serve as an immediate and multi-faceted catalyst for transformation—not only for SPY, but also for the L’Enfant Plaza and 10th Street, part of the long-term vision for the Southwest Ecodistrict.

“The International Spy Museum has long been a destination for residents and visitors, finding innovative ways to keep us connected with our past,” said District of Columbia Mayor Muriel Bowser. “The new Spy Museum will be a welcome addition to Southwest as we continue to attract businesses and expand economic opportunity.”

The District has been working with the Cleveland-based Malrite Company for more than a year to ensure the Museum stays in the District. Milton Maltz, the founder of The Malrite Company, created and founded SPY. The JBG Companies, owner of the majority of L’Enfant Plaza, will act as the owner’s representative during the construction period.

The Malrite Company and JBG collaborated extensively on plans for the new 140,000-square-foot facility, which will sit directly in front of the glass atrium on the Plaza. Renowned London-based architects Rogers Stirk Harbour + Partners created a design for the iconic building that will have a distinct and dynamic identity.Washington-based Hickok Cole Architects will be the architect of record for the project.

Design features include a glass “veil” suspended in front of an enclosed “black box” exhibition space that will allow the movement of people to be visible from both inside and outside, contributing to new energy along 10th Street. This sense of veil and black box reflects the Museum’s espionage-related themes of secrets revealed and hiding in plain sight. The new building significantly expands exhibit and educational space and adds an intimate theater along with unique event spaces.

“As a Navy veteran, I, along with my family, take pride in setting the stage for the International Spy Museum to grow,” said Maltz. “We consider it essential to ensuring the contributions of the dedicated men and women who serve in our intelligence agencies.  They are recognized for the invaluable roles they’ve played in winning wars and protecting Americans at home and around the globe.”

The SPY development at L’Enfant Plaza is expected to create more than 300 construction jobs. Additionally, the new and larger Museum is expected to generate a 20 percent increase in staff over its current location. The new building is expected to open spring 2018.

“Our relationship with the Spy Museum is an exciting new phase in our revitalization of L’Enfant Plaza,” said JBG Principal Britt Snider. “The addition of this popular cultural attraction will be a further catalyst to our investment in making L’Enfant Plaza a dynamic and active destination for workers and tourists alike. We are excited to work with the Malrite Company and see Mr. Maltz’s vision for the new Spy Museum become reality.”

About the International Spy Museum

The International Spy Museum, a 501(c)(3) private non-profit,  is the only public museum in the United States solely dedicated to the tradecraft, history, and contemporary role of espionage and intelligence. Open since July 2002, the Museum features the largest collection of international espionage artifacts ever placed on public display. The mission of the International Spy Museum is to educate the public about espionage and intelligence in an engaging way and to provide a context that fosters understanding of their important role and impact on current and historic events. The Museum’s collection chronicles the history of espionage, from its inception, to the modern day challenges facing intelligence professionals worldwide in the 21st Century. For more information, please visit spymuseum.org.

About The JBG Companies

Headquartered in Chevy Chase, Maryland, The JBG Companies is a private real estate investment firm that develops, owns and manages office, residential, hotel and retail properties. The company has more than $10 billion in assets under management and development in the Washington, DC area. Since 1960, JBG has been active in areas where it invests, striving to positively impact local communities. For more information, please visit JBG.com or find us on Twitter @TheJBGCompanies and Facebook www.facebook.com/TheJBGCompanies.