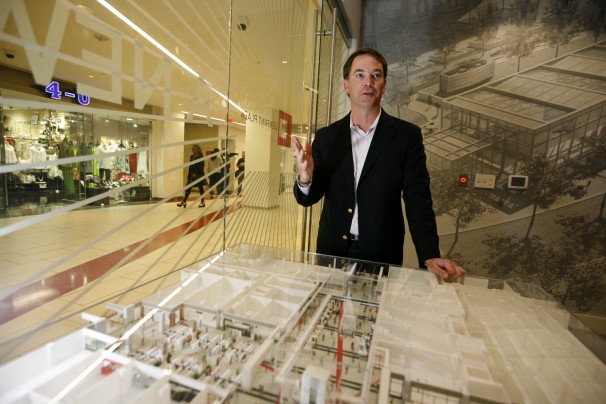 The iconic pyramid is gone.

In its place stands a three-story glass cube — much like Apple’s flagship store in Manhattan — that leads to an underground menagerie of restaurants, shops and seating areas.

The dark, cramped space, which was originally built in 1968, has been replaced by modern staircases, brightly-colored seating areas and a whole lot of windows.

“Everything is about natural light,” said Britt A. Snider, principal at the JBG Cos., the Chevy Chase-based company that owns L’Enfant Plaza. “Before this, it felt more like a dungeon than a retail complex.”

Among the dozens of shops and restaurants scheduled to open this summer: Amsterdam Falafel, Phillips Seafood, Dress Barn and a 10,000-square-foot CVS, as well as a hair salon, dentist and dry cleaners. Charley’s Grilled Subs will be the first eatery to open this week, with Panda Express following soon after.

JBG is also in discussions with a men’s clothier, fitness center and child care facility. The hope, Snider said, is to create a destination that attracts visitors during the workweek — when an estimated 30,000 people commute to the area — but also on evenings and weekends.

“L’Enfant Plaza is still very much a Monday-to-Friday, 9-to-5 kind of place,” said Suzanne Boggs, an associate for JBG. “We want to slowly change that.”

The reimagining of L’Enfant Plaza is part of a broader push to develop Southwest Washington. JBG is in the process of overhauling nearby office buildings, and the L’Enfant Plaza Hotel, which JBG sold last year to San Francisco-based Stanford Hotels, is also undergoing a year-long renovation. A few miles away, the Southwest Waterfront is being developed by PN Hoffman and Madison Marquette to include a mix of cafes, retailers, offices and and a newly-created market square.

“This was just the tip of the iceberg,” Snider said of the L’Enfant Plaza renovations, which were overseen by Detroit-based architecture firm SmithGroup JJR. “There is so much more we can do.”

Eventually, Snider says he hopes to add full-service restaurants to help attract crowds after-hours and on the weekends. JBG is also hoping that the new restaurants and shops help attract new tenants to the developer’s nearby office buildings, which have vacancies

JBG purchased L’Enfant Plaza in 2003. The first round of renovations — which were delayed because of the recession — were completed in late 2011. A number of new fast-casual eateries, such as Roti, Moe’s and Five Guys, moved in.

During lunch on a recent workday, restaurant lines snaked around the plaza’s corridors. Nearly all 300 seats were full.

“The first phase was a chance to see how well these retailers would do,” Snider said. “Demand for food was so high that we’re adding a second food court.”

In addition to higher ceilings and new elevators to accommodate families with strollers, there are televisions, wireless Internet and charging stations for smartphones and laptops throughout the plaza.

“We tried to create smaller nooks, places where you could gather for your 3 p.m. coffee break,” Boggs said.“It’s important for people to not feel cramped.”

JBG is experimenting with new ideas, as well. A summer concert series on the plaza includes lunchtime performances by local bands.

“I don’t think we’ll ever have Morton’s or Tiffany here,” Snider said, “but we’ve done a good job of identifying our demographic.”

This article appeared in TheWashingtonPost.com on June 1, 2014. Article by Abha Bhattarai.